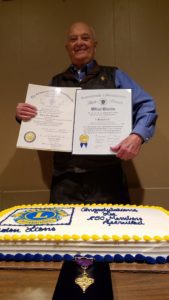 The LCI Membership Keys recognize individual Lions for the number of new members they invite to serve.  The 250 level is a rare achievement.  For a member to be counted towards the 250, they must have remained with the Club for at least a year plus a day. Many of Lee’s recruits have stayed with the Club for over a decade.  Counting those that stayed less than a year, Mr. Williams has introduced well over 500 people to Lions service.

Lee did not expect such a turnout and said it is a great honor to be presented with the Global Key.   When asked, how did you get so many folks to join, he said “It’s simple, I enjoy talking to everyone, in line at the grocery store, at the Thrift Store, or working an event.  At some point I’ll ask them, “Has anyone ever asked you to join the Easton Lions?”.  That is the key to my success!”

Lions Club International President Gudrun Yngvadottir, from Iceland, wrote of Mr. Williams “Lee, your dedication has positively impacted many people and will for years to come. … Your dedication has increased our effectiveness in our communities and paved a trail for future generations of Lions.”

Williams is among the select few in the world who have reached the 250 level of support and dedication to Lionism. He’s been a member of the Easton Lions Club for 40 years and was instrumental in starting major club projects like our

Lee, a lifetime member of the Easton community, has contributed to many projects throughout the town, including the shovel hand clock on Main Street, the composting outhouse at NRT’s Sheep Pasture, and the pavilion at Ali’ Park of Eastondale on Pine Street.

What’s it like to be a Lion?  It’s simple: Where there’s a need, there’s a Lion. There are Lions Clubs in over 200 countries with 47,000 clubs and 1.4 million members helping others and making communities better. To find a club near you, browse the Lions Clubs International site at  www.LionsClubs.org – “Start Your Service”.

The Easton Lions Club has 179 active members and hold our dinner meetings on the 2nd and 4th Wednesday of the month at 7:00 pm at the VFW on the Corner of Rockland St and Allen Rd. Since September we have added nine (9) new community members:

John Tracy was also recognized as the Lion Rookie of the Month in December.  The Lions Club is a place where willing individuals give their valuable time and effort to improve the lives of our neighbors and children, and to build a strong community.  So as Lee always says: Has anyone ever asked you to join the Easton Lions?

If not, explore what it means to be an Easton Lion on our website www.EastonLions.org, talk to a Lion, reach out to our Membership Chair, Rob Goodrich, at membership@eastonlions.org. or call Avery Lee Williams, our Chief Recruiter, at 508-345 6544. Rob and Avery would like to invite you to be our “no obligation” guest at an upcoming meeting to meet our active members and get an idea of who we are.

View all meeting photos in our Facebook Photo Album