It includes many pictures, tributes, eulogies, his obituary, and timeline of his life.

Avery Lee Williams, long-time member and “Chief Recruiter’ of the Easton Lions Club, passed away in the early morning hours of September 23, 2021.

Lee joined the Easton Lions Club in 1979, and was a member for 42 years.   In 2019 he was awarded the Membership Global Key & Medallion by Lions Clubs International in recognition of recruiting and sponsoring 250 members. Including those individuals who stayed in the Club for less than a year Lee introduced over 500 members to the organization.  Since receiving that recognition Lee continued to recruit and sponsor new members.  He was working to ‘close the deal’ on a new member just days before his death.

Lee learned ‘community development’ as a member of the Jaycees, which he joined in 1960.  He credited that group with providing ‘personal leadership training’ that he tried to extend to the Lions.  Virtually every program that the Easton Lions Club has created and operated over the last forty years was shaped by Lee’s leadership.

Lee was integral to many legacy projects around town, some of which bear his name, many which don’t, but all were advanced by the strength of his vision and drive.  One of his more successful creations, the Easton Lions Club’s Thrift store, has generated hundreds of thousands of dollars that have been redirected back into the community through charitable donations to local groups, and the Massachusetts Lions Eye Research Foundation (MLERF.)

Avery Lee Williams will hold a place of honor in the history of the Lions Club, both in Easton, and beyond. 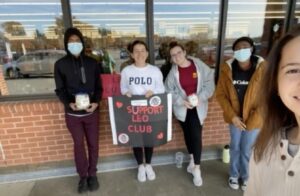 Thank you to the Oliver Ames High School Leo Club for all the service you do within our community. You brought inspiration to our members

Katie Terino, House Of Possibilites The Easton Lions Club is a supporter of many causes in our local community.  We have great partnerships with numerous