The 2016 Easton Holiday Festival is officially “in the can” (er, the film production term, not the trash can)! 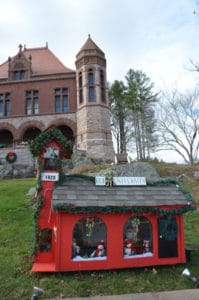 Over two Saturdays, our courageous team lugged and tugged to make sure all items were securely put in storage for their long winter’s nap.  We fielded a crew on Saturday, January 7 of John Mallers, Ram Penumarthy, Harry Somers, Bill Palmer, John Barry, Jim Abate, Tony Cabral, Stanley Borgeson, Ray Morrell, Mark Vinocoor, Josh Jacobs, Mike Pietrowski and Jim Lee (and l know l am forgetting someone!!).  Sadly, we were not able to secure a machine to lift up the large display houses, so that had to wait a week.

But, it was worth the wait!  David Howe generously provided a front-end loader and an operator to help us on Saturday, January 14, and in about an hour and 15 minutes, it was all wrapped up.  The enthusiastic gathering of Lions watched Dave Howe’s equipment operator, Joe, skillfully nestle the houses into the storage trailers so Mike Looney (of Looney Transportation) could pull the trailer back to its storage place.  Our Lion’s efforts were led by John Mallers (who put in may additional hours putting away items from the Festival), Darcey Hunter (who brought his friend, John), Harry Somers, Rich Freitas, Dennis Gutman, Nick Fornaro, John Barry, Rob Goodrick, Stanley Borgeson, Andrew Parker and Ron Handverger.

My thanks to you all, and only a few months until we start planning the 31st Easton Holiday Festival! 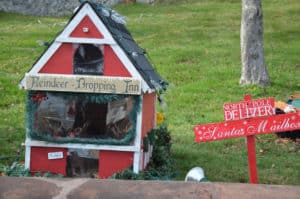