It has been over 80 years since Bill Fenwick, Easton Lions first “King Lion”, shared his vision with 20 other service-minded men of Easton.  That vision was a dream of humanitarianism that is kept alive today by more than 150 women and men – The Easton Lions are the largest Lions Club in the state of Massachusetts since September 1, 1999.

Looking back for a moment to September 16, 1931 . . . the Gillette Brothers appeared in the Easton area as paid organizers of Lions International to put Easton into the Lions camp.

Possibly they arrived at the depot to be greeted by Station Master Bill Fenwick. Ironically the Easton Lions Club framed charter is kept in the depot by the Easton Historical Society. This charter was originally presented to King Lion Bill at the Minnetonka Restaurant located at routes 138 and 123, South Easton; the present site of the CVS Drug Building.

Over the years meetings were held at Harveys and Farrar Restaurant in those early days. Catered meals were served at the Frothingham Memorial Hall and Harmony Hall. The former Chicken Coop, Merry Macs, and the Tally Ho were the restaurants serving the club members. Le Page’s Steak House, Edmunds and the Four Hundred, Savini, and Diplomat Restaurants were the second and fourth Wednesday’s meeting locations. Today the Easton Lions meet at the V. F. W. Hall, with a catered meal by Claudia.

Service was, and still is, our motivating principle. In the thirties the Club equipped the Dental Clinic at the Oliver Ames High School on Lincoln Street and underwrote Dr. Harold Smith’s work at the Clinic for a nominal sum of six dollars per morning. In the following five years a second dental chair was provided. Eighty-four Thanksgiving Baskets were distributed to the needy during these years.

To raise funds during the thirties and forties, the Club Members conducted card parties and presented lectures. Some of the most successful were Alton Hall Blackington and Herbert Philbrick of the popular TV series “I Led Three Lives”. During the war years, collection areas were set-up for crushed tin cans.

In the fifties and sixties, the Club Members honored the Service Men of World War II and the Korean Conflicts by erecting a Memorial Stone at the Easton Green.

Funds for our projects in those days were raised by selling door to door, tea, light bulbs and brooms made by the blind. Profits from these projects went to the annual Mass. Eye Research. The annual Child Welfare night featuring a Spring Musicale at Bruno’s Restaurant helped our local supervised Summer Playground Program, co-sponsored with the Frothingham Trustees. This program has since been turned over to the Easton Recreation Department.

Still in use by the Easton Fire Dept. are the aluminum rescue boat and resuscitators donated by the Club.

During the early sixties and mid-seventies, golf tournaments and dances were conducted to raise money for scholarship awards. The club also erected a chain link fence at the Unionville Playground on Route 138 for the Safety of children attending the Lions Summer Playground Program. The School Department received two eye-testing machines for student annual check-ups.

In memory of past Deputy District Governor Arthur Yardley, members constructed and maintained an ice skating rink, complete with fireplace, flood lights, etc. This facility was subsequently turned over to the Easton Recreation Department and dedicated as the Arthur Yardley Memorial Rink. The name has since been changed to the Yardley-Wood Rink in recognition of the continuing efforts of Ken Wood in improving the rink facilities.

In the area of health, Lions Eye Mobile annually conducts glaucoma, diabetes, and blood pressure clinics. Needy children were provided with eye glasses, tonsillectomies and for the handicapped, mobile carts and leg braces.

Also in the early seventies the club placed paper collection trailers at major intersections. Over two million pounds of recycled paper have been processed. Town projects, scout programs, school and church organizations have been assisted in their fund raising programs by participating in this joint venture.

Going into the eighties a popular fund raising project, the recycling of plastic beverage bottles and aluminum cans, is an ongoing program. Colorful cup plates with historical monuments and famous buildings and a game of Easton are also an ongoing fund raising project. For administrative funds a meeting auction is held with members donating treasured items. For activity funds, Lions Club and Media One Cable Members conduct the annual Channel 9 Auction Program with donations from local merchants and citizens assist the Lions to meet the activity budget goals, including the annual Holiday Festival at the Rockery held on the first weekend in December.

Through the co-operative effort of local business concerns and the Lions members, the Easton Fire Department was presented with the “Jaws of Life”. This unit has been utilized in saving many auto accident victims.

Since 1931, be it dental chairs, rescue boats, an eye-testing machine, playground, sports programs, drug control programs, auction, or recycling projects, our aim has been to extend our helping hand to those in need. Adding to this our donations to Massachusetts Eye Research, the Eye Bank and the “Journey for Sight” programs, we have truly earned to the right to say – “WE SERVE”. 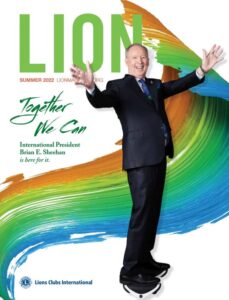 LION Magazine is dedicated to promoting the “We Serve” philosophy that Lions around the world demonstrate every day.  Our new International President Brian Sheehan knows

All “new” vintage glass   The Easton Lions Thrift Store is OPEN tomorrow, 8/7/22 from 10am-2pm with all new items this week!   Featured Item of

You never know WHAT you’ll find at the Easton Lions Club Thrift Store!   The Thrift Store is OPEN Saturday, 7/30 from 10am-2pm and there’s