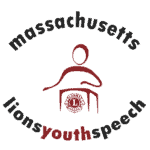 Our Youth Speech Competition provides an opportunity for students in grades 9, 10, 11, and 12 to speak publicly and freely on a designated topic of general interest.

The competition is open to all students who reside within or attend school located within MD33, including foreign exchange, charter school, private school, home schooled, or independent study students in grades 9, 10, 11and 12, provided they are sponsored by a Massachusetts Lions, Lioness, or Leo Club.

Best in the State

The competition culminates with five statewide district winners vying for the title of BEST IN THE STATE at the annual Lions State Convention.